Made of the exotic rattan palm

Rattan is a material with a history. It is traditionally made from stems of the rattan palm, a climbing plant that mainly grows in tropical rainforests, such as Malaysia, India, South China and even Australia. The stems of this plant can be up to ten centimetres thick and are solid, unlike bamboo, for example, which is hollow inside. These stems consist of a core surrounded by a harder outer layer. The latter is used for the well-known wickerwork from which numerous pieces of furniture and accessories are made. 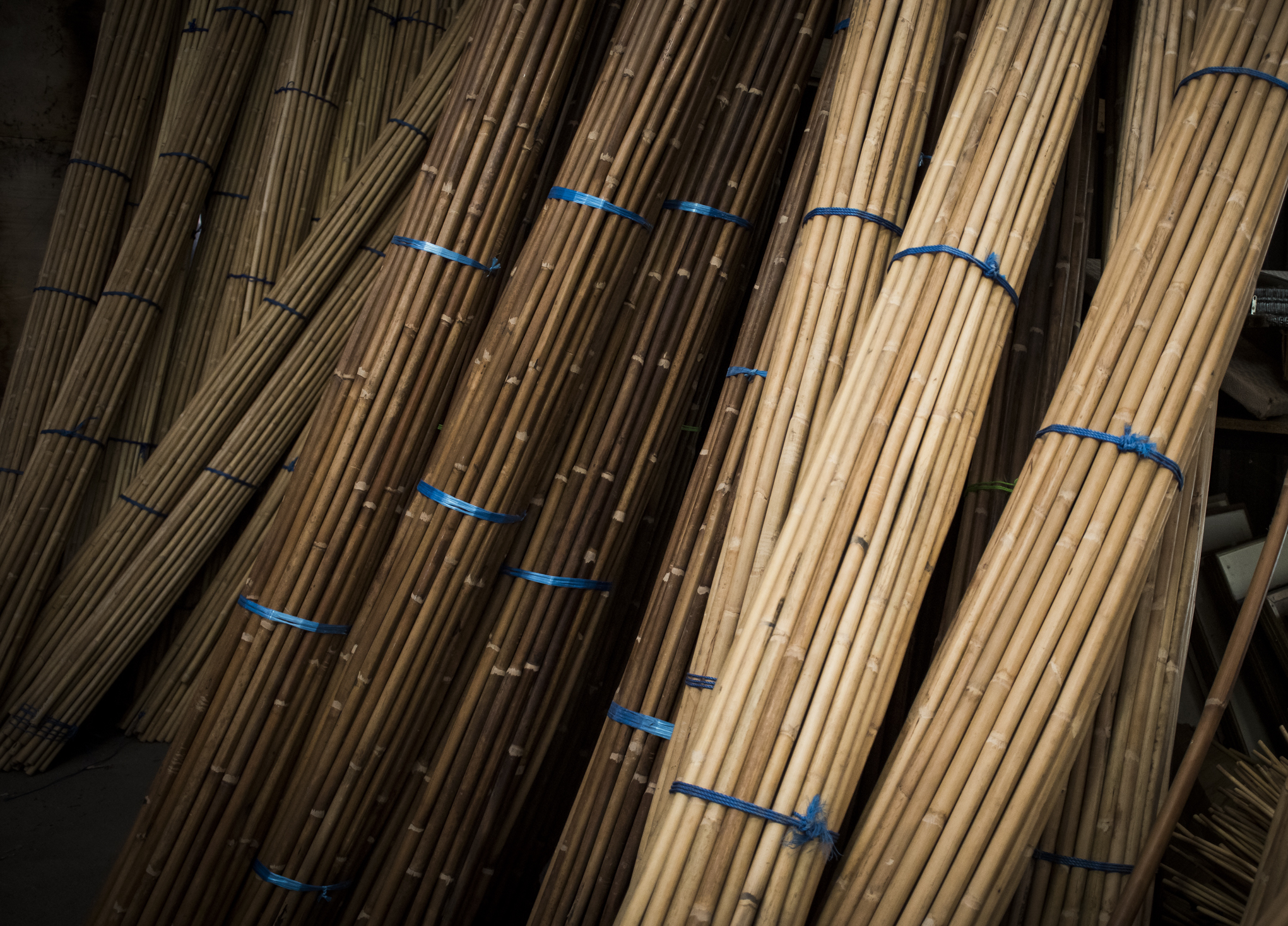 The 19th century: the iconic French bistro chair sees the light of day

The history of rattan goes all the way back to the seventeenth century, when this material was used as packing material by British and Dutch shipping companies. In addition, rattan replaced reed as a material for the manufacture of furniture, because it was lighter, stronger and cheaper. Halfway through the nineteenth century, rattan reached its first popular peak. In the French capital, the typical rattan bistro chairs that still adorn the Parisian street scene today were ubiquitous. The furniture company Maison Drucker, founded in 1885 and still active, was responsible for the majority of these chairs with rattan wickerwork and coloured bands. 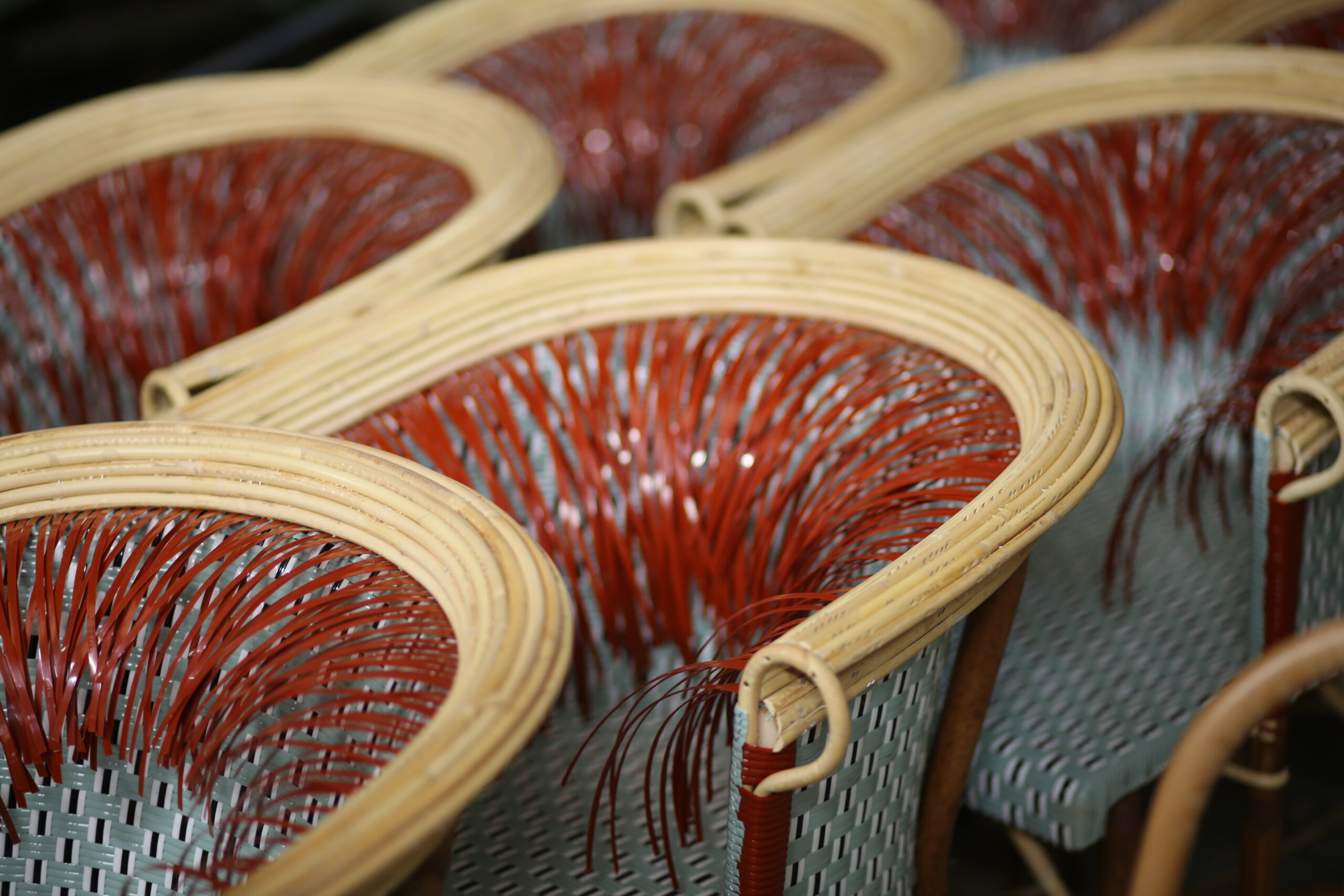 The 20th century: rattan furniture inspired by Arts and Crafts and Art Nouveau

At the beginning of the last century, rattan was given another boost, as a result of the Arts and Crafts movement, the British forerunner of the art nouveau. Furniture designed at that time was characterised by its round shapes of this organically inspired style. After several decades of being replaced by the then new and very popular synthetic material, a new revival of rattan furniture took place in the 1970s. Avant-garde designers such as Janine Abraham, Paul Kjærholm and Hans Wegner designed iconic chairs that stood out for their elegant appearance, in contrast to the earlier, more informal look characteristic of rattan furniture.

The 21st century: a predilection for natural materials

During the last decade of the last century and the first of this century, minimalism and metallics reigned supreme and rattan and canework almost no longer fitted into the picture. But in recent years, it has made a comeback. The desire for furniture that breathes a retro style and for natural materials in the interior is fertile ground for the current popularity of this remarkable plant. It is therefore not surprising that contemporary designers are now only too happy to work with rattan.

The German family firm Thonet has many decades of experience in the design and production of chairs, including the iconic Thonet No. 14 chair, also known as the “bistrot chair”. After much experimentation, founder Michael Thonet succeeded in bending solid beech wood, making it possible for the first time to produce a chair on a large scale. The Thonet No. 14 chair, with its simple curves and canework seat, appeared on the market in 1859 and distinguished itself by its beautiful look and budget-friendliness. The chair quickly became a huge success and is again very popular in many design interiors today. 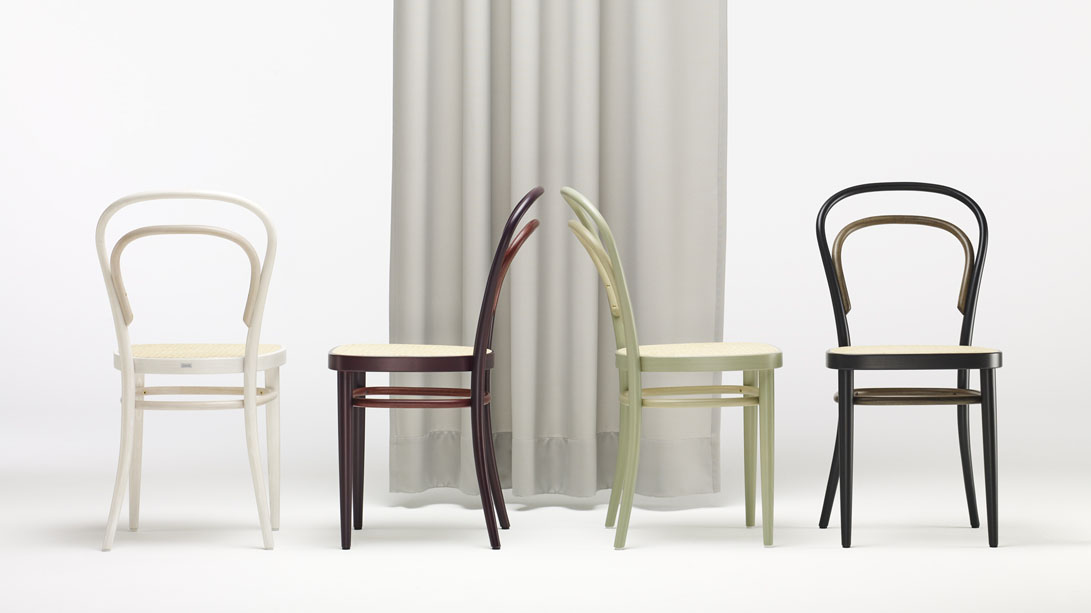 But the Thonet chair is not the only canework-dining chair in the collective design memory. In 1947, the Frenchman Marcel Gascoin, one of the leading furniture designers of the post-war period, designed the C-chair (nowadays available from manufacturer Gubi). This charming dining chair with rounded corners was designed with functionality and simplicity in mind and radiates a practical but also a cosy atmosphere.

And then, of course, there is the Chandigarh office chair in canework by architect and furniture designer Pierre Jeanneret. The Swiss designer, who spent much of his life working with Le Corbusier and Charlotte Perriand, is omnipresent today. Unlike Thonet’s chair, we do not see any round shapes here, but the design stands out for its unusual and angular lines. This iconic chair dates back to the mid-1950s and was originally designed for a large architectural project in Chandigarh, India, for which Jeanneret was responsible together with the architect couple Maxwell Fry and Jane Drew. It is a real eye-catcher that exudes pure elegance and also has something masculine about its angular forms. 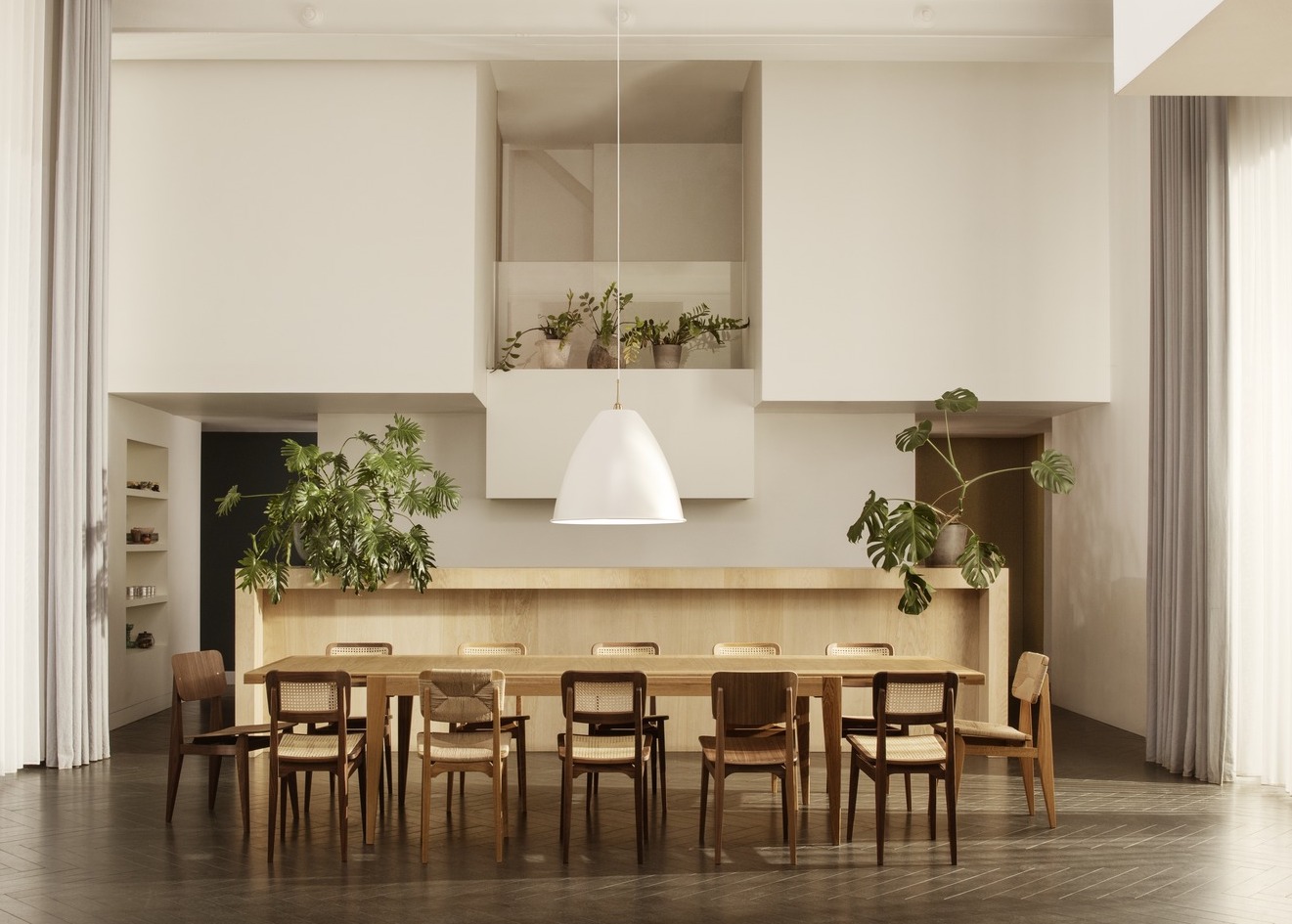 Today we also find a lot of interesting designs made of rattan, canework, new fibers and techniques. For example, there is the N.0 chair designed by Front Design for Gebrüder Thonet Vienna, a contemporary interpretation of the well-known Thonet bentwood chair, which reproduces the bent wood and rattan upholstery of the original, but at the same time gives it a contemporary twist. Another absolute eye-catcher is the Nomad Chair by NORR11, an oversized lounge chair finished in cognac or black leather that unites Scandinavian materials and a classic Moroccan furniture style.

Many brands also have outdoor furniture in their collection with rattan accents or similar materials. The round Elio armchair, in Tricord weaving (a combination of nautical and synthetic fibers) by the Canadian power duo Yabu Pushelberg for the Belgian brand Tribù and the Samba armchair, in Olefin (synthetics), by Kris Van Puyvelde, one of the founders of the also Belgian Royal Botania match the elegant nonchalance of rattan furniture. Also the Torii Nest chair, in polypropylene, imitating wickerwork, from the leading Italian brand Minotti with its cozy round back immediately catches the eye. These brands are surely looking for strength for outdoor use and sustainability. 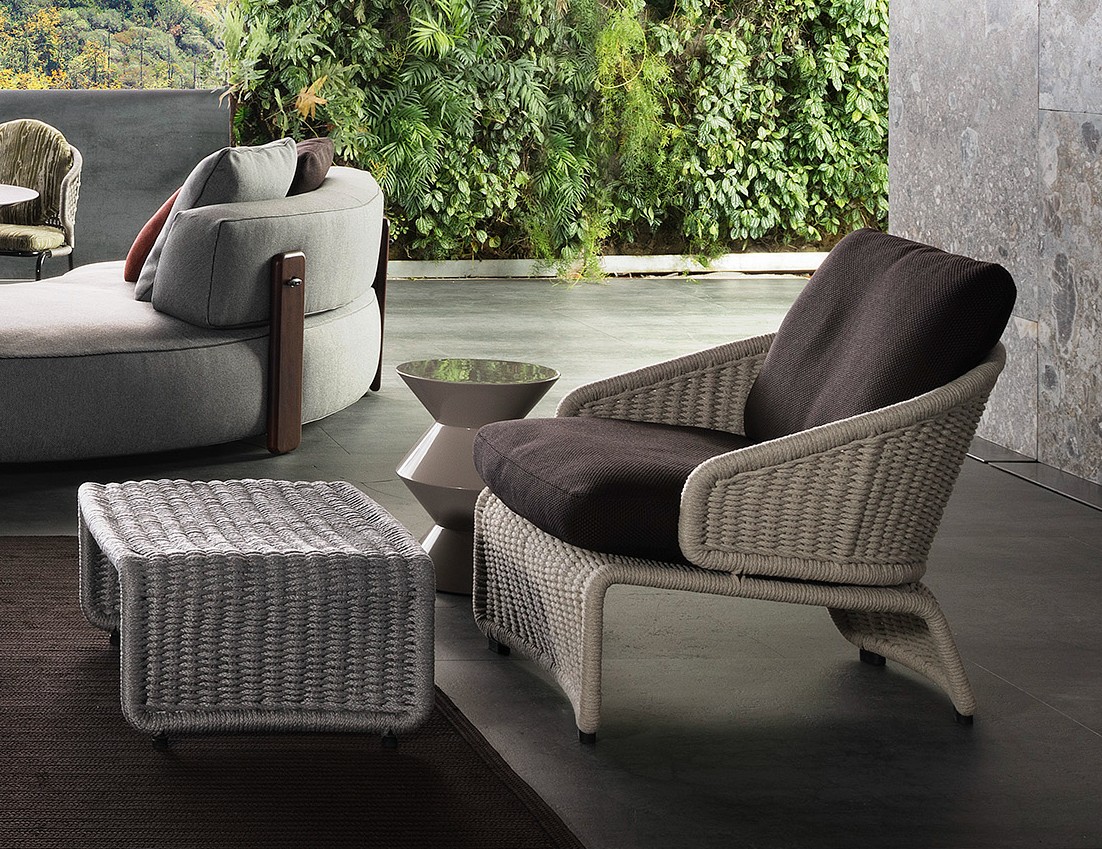 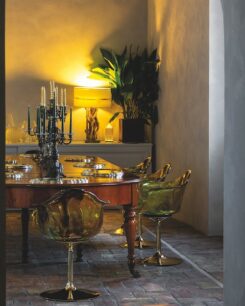 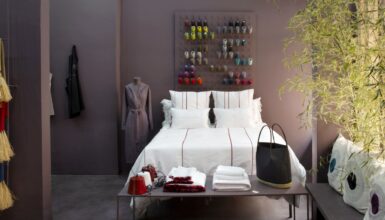 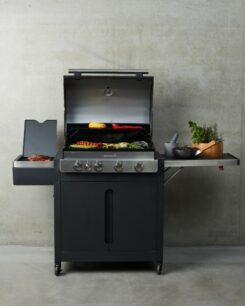 A Belgian design barbecue for the outdoor kitchen 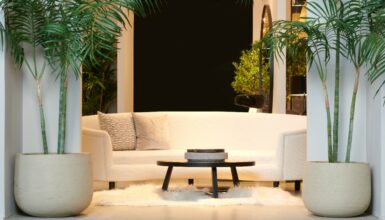 5 stylish and exquisite stays in and around Marrakech